Coach Robert “Bob” Hathaway, Class of 1948, was posthumously honored as one of the Inaugural Ben Lippen Athletics Hall of Fame members. Please enjoy the video below from the Hall of Fame luncheon honoring the inaugural class of 2021. Accepting the award on his behalf was Coach Hathaway’s son, Mike.

Coach Hathaway returned to Ben Lippen School in 1960 to coach soccer. From that time through 1979, he was at the helm of the soccer program at the Asheville campus. In addition to coaching soccer, he taught in the math department. Hathaway and his wife, Bonnie, moved with Ben Lippen when it relocated to Columbia in the late 1980s.

In the early years, little soccer was being played in North Carolina, especially in the western part of the state. With few nearby high school programs to compete against, Coach Hathaway pioneered the effort to expand opportunities for his boys to play across the region.  In 1976, Ben Lippen soccer was undefeated against other high schools and many junior colleges. That year, the team scored 114 goals and allowed only eight goals against them. Due to the success of the team in ’76, Hathaway was named the North Carolina Scholastic Soccer Coaches Association Coach of the Year.

While leading the Falcons for 20 seasons, Hathaway’s teams had a record of 256-34-20, which included winning streaks of 76 and 65 games. This record still stands as the most ever in the history of North Carolina prep soccer. Hathaway was named to the North Carolina Soccer Hall of Fame in 2002.

Hathaway’s primary desire was to teach and coach young people how to live their lives to bring glory to God and not themselves. For many of his players, these relationships lasted far beyond the soccer season and well into adulthood. Colossians 3:23 embodies Coach Hathaway’s lifelong pursuit: “Whatever you do, do it heartily, as to the Lord and not to men.” 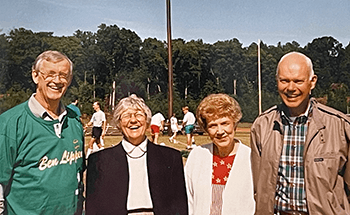 Before his death, he was married to his devoted wife, Bonnie, for 55 years and had two children, Mike and Sharon, both of whom are Ben Lippen graduates. Ben Lippen’s football and soccer stadium, Hathaway-Weeber Athletic Complex, is named after Coach Hathaway, as well as Bob Weeber.