Coach George Johnson was posthumously honored as one of the Inaugural Ben Lippen Athletics Hall of Fame members. Please enjoy the video below from the Hall of Fame luncheon honoring the inaugural class of 2021. Accepting the award on his behalf was Coach Johnson’s wife, Helen, and daughter Miriam.

Once known as “The Father of Cross Country” in South Carolina, George Johnson ran track as a student at the University of South Carolina. His love for running led him into a long career of coaching cross country and track.

Coach Johnson coached cross country and track at Ben Lippen from 1989 to 2012, winning a remarkable 11 State Championships. Before coming to Ben Lippen, he taught and coached at Brookland-Cayce High School for 30 years, where he won six state championships.

Coach Johnson had two mottos that he would often repeat to his runners.  The first was “PMA,” which stands for always have a “Positive Mental Attitude.” The second was Philippians 4:13: “I can do all things in Christ who strengthens me.”

Many of Coach Johnson’s runners remember these philosophies and the impact and influence that he had on them. Luke Marr, Class of 2010, said as a student, “Coach always taught us about having a positive mental attitude, meaning when you feel too exhausted to continue but only have a mile left in the race, be positive, for soon you will cross the finish line!” 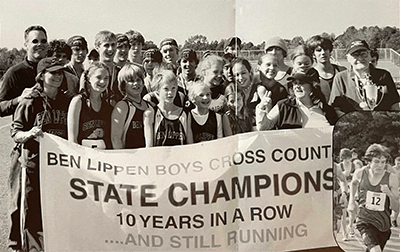 Another one of Johnson’s runners, Thomas Fisher ’11, said, “Everybody worked hard and improved over the season. Coach was out there every day, encouraging us to perform the best we could.” Following college graduation and Johnson’s retirement from coaching, Thomas Fisher returned to Ben Lippen to teach and coach the Track and Cross Country teams for several years.

Coach Johnson was married to his beloved wife Helen for 57 years. They had three children, Miriam, Rocky, and Ann.