Katie Shoemaker, Class of 2012, was honored as one of the Inaugural Ben Lippen Athletics Hall of Fame members. Please enjoy the video below from the Hall of Fame luncheon honoring the inaugural class of 2021.

From seventh through twelfth grades, Katie Shoemaker was a member of the Ben Lippen Varsity Swim Team. She specialized in the 50 freestyle and 100 butterfly, winning 11 individual gold medals during her swimming career at Ben Lippen. She was also named All-Area Swimmer of the Year and a four-year YMCA National Qualifier. She is one of the most decorated female athletes at Ben Lippen School.

Katie says that her swim coach at Ben Lippen, Hank Wright, played a huge role not only in her own career as a swimmer, but he was the driving force in starting Ben Lippen’s swim team. “He always treated me as an equal, and he included me in planning strategies for big meets,” Katie remembers. “He even let me be the ‘assistant coach’ during my sophomore year when I was unable to swim due to a shoulder injury.” 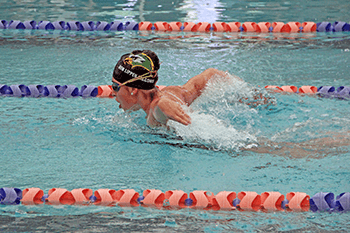 One of Shoemaker’s favorite memories during her time at Ben Lippen occurred in 2011 when the team came very close to winning the women’s team title. She said, “Although we fell just short, it showed how hard Coach Wright and the team had worked over the prior six years.”

Swimming at Ben Lippen changed Shoemaker’s life for the better. “Swimming has given me incredible opportunities and has shaped who I am today,” she said. “I learned to channel my competitive drive into something productive. To this day, my best friends are former teammates.”

After graduating from Ben Lippen, Katie attended Liberty University where she continued her swimming career.