Graham Tribble, Class of 2006, was honored as one of the Inaugural Ben Lippen Athletics Hall of Fame members. Please enjoy the video below from the Hall of Fame luncheon honoring the inaugural class of 2021. 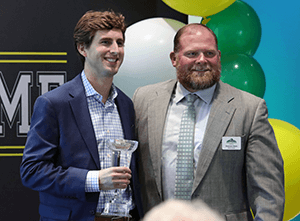 During his time as a runner at Ben Lippen, Graham set South Carolina Independent School Association (SCISA) track records in the 800m, 1600m, 3200m, and the 5k in Cross Country. He was a four-time state champion in the 1600m and the 3200m.

In addition to his achievements in athletics, he was also an excellent student and leader on campus. He was named to the National Honor Society and served as student body president at Ben Lippen School. 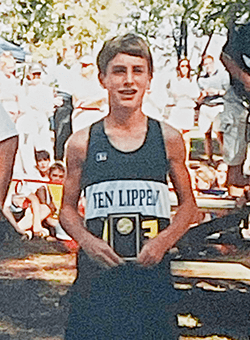 Graham recounted some of his best memories from running at Ben Lippen. “The cross country teams we were able to build, particularly during my junior and senior year. Coach George Johnson led the way, and our teams were some of the best in the state among any schools,” Graham said. “We had a number of guys who worked hard and wanted to win. I wanted our team to win just as much as I wanted to win individually. I wanted us to get after it.”

Graham states that Coach Johnson and teammates Selwyn Blake, Mark Bedenbaugh, and Rob Devlin made a lasting impact on his life. He still stays in touch with the late Coach Johnson’s wife, Helen Johnson. 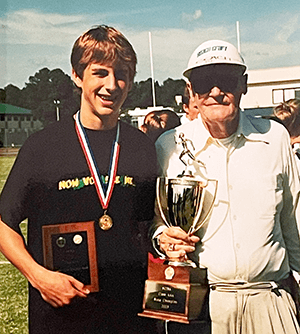 He recounted, “I learned lessons about contributing, being a leader, and what it takes to win. Coach Johnson brought passion to the job every day. I tried to do the same and have continued to strive to be a good leader on teams that I have been a part of since then, whether that was on the UVA Cross Country or Track and Field teams or at work,” Graham said. “I think one reason I was able to be the captain of the team at UVA, as well as the MVP of the cross country team, was because I learned so much as a part of Ben Lippen’s Cross Country and Track and Field teams.”

He continued by saying, “At the end of the day, I am thankful God placed me at Ben Lippen and placed the people in my life there. My closest advisor, collaborator, mentor, coach, and even friend while at Ben Lippen was Coach Johnson. We spent countless hours together, stuck with one another through all the ups and downs, and accomplished a lot together. I am grateful for his time there.”

Following his graduation from Ben Lippen, Graham excelled as a runner on the track and field team at the University of Virginia and served as captain. Graham currently lives just outside of Washington, D.C., and works for Noodle, a higher education and software services firm. He continues to enjoy the sport of running.