Over 100 Ben Lippen alumni returned to the nest for Homecoming Weekend 2018 over the weekend of September 28 and 29! We were excited to see so many familiar faces back on campus for the Alumni Tailgate and Homecoming Carnival before our home football game on Friday night. Alumni families had a fantastic time at the student-run carnival which included bounce houses, games, prizes, and food trucks like the Belgian Waffle Truck, Los Chicanos, and The Haute Dog Lady. After the carnival, alumni enjoyed dessert at the Alumni Tailgate while they reconnected with former classmates and teachers.

At halftime, we honored the 2008 baseball team for the 10-year anniversary of their state championship win! 12 members from the 2008 team were there to be recognized. The Falcons went on to win the football game against Wilson Hall 40-28! 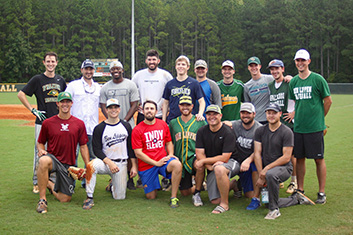 On Saturday, 17 Ben Lippen baseball alumni came out to enjoy our first annual alumni baseball game! Head baseball coach Matt Padgett, joined by six current Falcon baseball players, participated in the game as well. Former Ben Lippen baseball parent Kenny Carter announced the game while his son, Joey Carter (member of the 2008 team), played. Attendees enjoyed a delicious BBQ lunch immediately following the game in the baseball pavilion. We were thrilled to see these players back on the field and are excited about continuing this tradition for years to come.