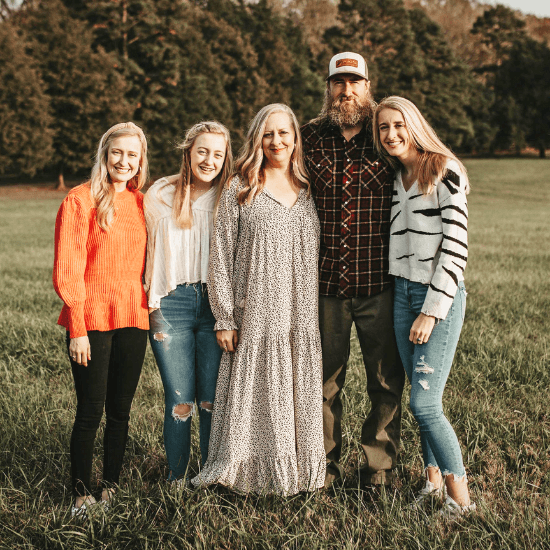 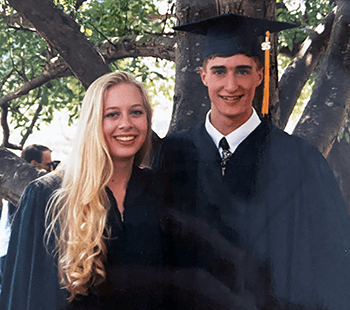 When Ben Lippen relocated from Asheville to Columbia, Matt Beyer and the former Brooke Bledsoe were among some of the first students to enroll as 7th graders. They became good friends after “getting married” in Mr. Bobby Young’s class during their junior year, and they began dating their senior year. They graduated in 1995, attended CIU, and were married in the summer of 1998.

When it was time to choose a kindergarten for their oldest daughter, Emma Grace, 15 years ago, they knew that Ben Lippen was where they wanted their own children to attend. Their daughters Riley and Ava followed Emma Grace and also became Falcons at the beginning of their school careers. After graduating from Ben Lippen in 2019, Emma Grace enrolled at Clemson University, where she is studying Business Management. Riley is currently a sophomore at Ben Lippen, and Ava is a freshman.

The Beyers love visiting Colorado, eating good food, and sharing family meals. They started YellowDog Lawn Care 12 years ago and then Grace Coffee Company five years ago, after seeing a need for good coffee in Blythewood, South Carolina. In August 2020, Grace Coffee Company became a fixture on Ben Lippen’s Monticello Road campus and has provided a great meeting spot for our students and parents alike.

“We’re so grateful for the community that we were blessed to be part of as students at Ben Lippen and know it has been a blessing for our girls, as well,” Brooke said. “We really have a special school in Ben Lippen.”