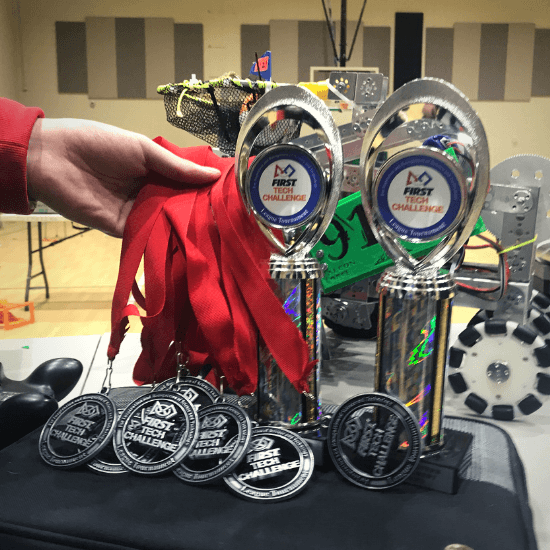 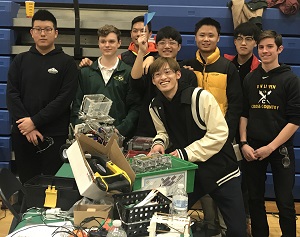 Ben Lippen’s Robotics team has a lot to celebrate! On December 1, our team, 9121 Falcon Force, was ranked 5th against some of the top teams in the region at the Capital City League for the First Tech Challenge (FTC).  There was no question they needed to make several improvements in order to rank higher.  On January 12, at their second meet of the school year, the team was able to win enough games to rank 2nd.  The students’ efforts were paying off, but the team decided to keep pressing on and make even more adjustments to improve. On February 2, their third and last qualification meet, Falcon Force ranked 1st and headed to the League Championship Tournament with an overall ranking of 1st. At the final Capital League Championship on Feb 23, after elimination rounds, Falcon Force was unable to secure the Capital League title, losing in the final match as an alliance but obtaining 2nd-place in the league and retaining its #1 ranking with tiebreaker points. They were awarded two trophies for “League Tournament Finalist Alliance” as well as “League Tournament Judges Award” in recognition of their accomplishments.

The team then competed against 30 other teams that qualified within their league tournaments to be in the South Carolina State Championship over the weekend of February 22–23.  Ben Lippen’s performance was outstanding, but as an alliance, they were unable to outperform combined scores against other alliances.  They won three out of five matches and score the most tiebreaker points giving them a reputable 7th place in the State. 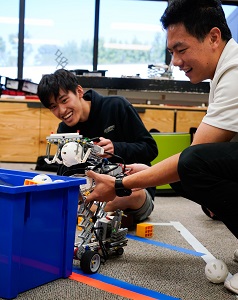 FIRST Tech Challenge is a competition in which teams made up of students in grades 7 through 12 design, build, and program robots which then compete in a head-to-head challenge to accomplish specific tasks.  Each match is played with an alliance team.  Their combined scores vs the other alliance’s score determine the winner.

The Falcon Force Robotics won the PTC Design Award in 2015. This award was sponsored by Parametric Technology Corporation (PTC), the developers of CAD tools, Creo and Mathcad. PTC gives licenses to the FTC student teams for these software products to help them with their designs. This year, the robotics team is the biggest to date and they have done a phenomenal job at ensuring that Ben Lippen School competes at the highest level with character and excellence.