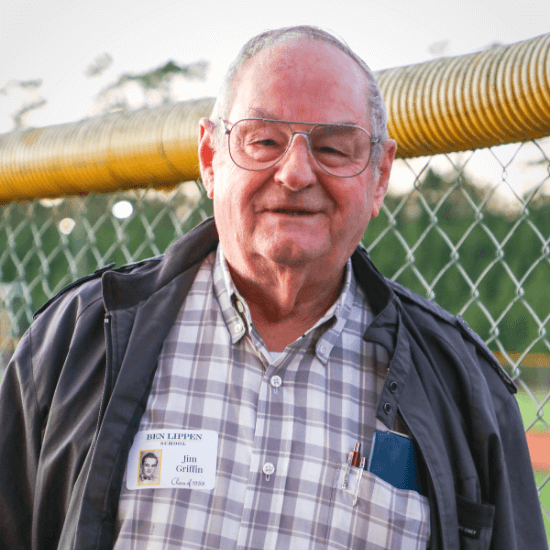 If you have ever been to a Ben Lippen Homecoming, you have likely met Jim Griffin. For most years since his graduation in 1955, he gladly made the trek back to campus from Raleigh, North Carolina, where he has lived for most of his life. There are many reasons that Ben Lippen holds a special place in his heart, but the fact that he found Christ on the Mountain as a student and made special memories to last a lifetime, are chief among them.

As a child growing up in Raleigh, Jim began attending Edenton Street Methodist Church because he loved the people there. When he reached high school age and started to make decisions that would negatively impact his future, many of the leaders of the church knew that Jim would benefit from the Christian education and nurturing environment that Ben Lippen School would provide. Dr. Howard Powell, the pastor of the church at the time, called the school and secured a spot for Jim. The church had bake sales and other fund-raisers to pay for his tuition to ensure that he could attend. Jim moved to Asheville in 1951 as a high school freshman, and his life was never the same.

When Jim enrolled, he thought he was a Christian. After hearing a missionary speak during one of the conferences that Ben Lippen hosted, God began stirring in his heart the need to follow Christ for the rest of his life. From that time on, Jim was committed to living a life pleasing to the Lord.

Jim has many funny stories from his Ben Lippen days, but one, in particular, stands out. During dinner one night, Jim said that he stuffed his pockets full of muffins to eat later. From that event, he acquired the nickname “Muff.” He said that even Dr. Robertson McQuilkin, Ben Lippen’s headmaster, called him by that name until graduation.

Following a short stint in college, Jim joined the Army and spent his first two years of active duty in Korea. He then spent 30 additional years serving in the Army Reserves. During his time in the reserves, he got married, had three children, began a career in the printing business, and then transitioned to working in sales. While juggling all of these responsibilities, Jim spent 40 years delivering newspapers every morning before work for Raleigh’s News and Observer.

Since his graduation from Ben Lippen in 1955, Jim has been giving back to the place where the trajectory of his life changed. He said that when he was in the Army, he would write a year’s worth of post-dated checks, and Mrs. Lovelady in the finance office would deposit them monthly. In 2006, he established a scholarship at Ben Lippen for children from single-parent families, in hopes that a student who otherwise could not attend Ben Lippen would be able to do so. He says that what he has done is “not much,” but the students whose lives he has impacted would beg to differ.

Attending Ben Lippen School changed Jim’s life for the better, and he wants other young people to have that same opportunity. “The Lord did a wonderful thing for me at Ben Lippen,” Jim said. “There is no way that I could pay Him back for what He did, which is why I have always supported the school.”