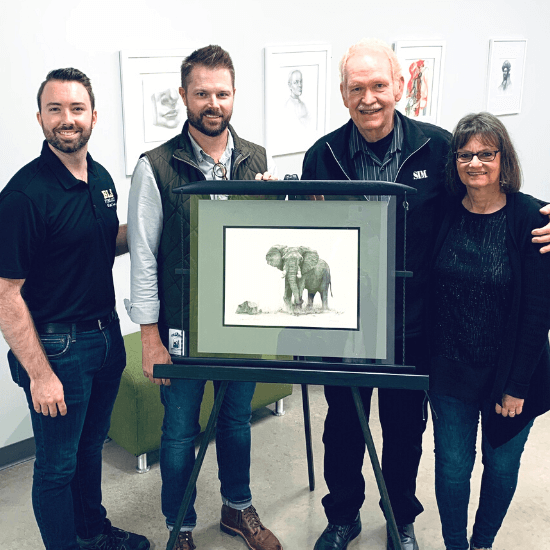 Jim Rendel ‘69: Sharing the Gospel through Aviation and Art

If you walked through the halls of the new Arts and Science Center (ASC) during the last school year, you likely noticed many new and exciting features, including the impressive aviation art by Jim Rendel ‘69 on loan to Ben Lippen. The moment his intricate drawings were placed around the ASC last fall, students began to take notice, ask questions, and share their amazement at his talent.

Jim grew up on the mission field, where he developed a love for airplanes. His family lived 500 miles from the SIM (Sudan Interior Mission) boarding school, so he and his siblings would often have to travel to school by plane. Once he was in high school, he enrolled at Ben Lippen in Asheville. Because of his love of art, Jim taught himself to draw while he was a Ben Lippen student. During his senior year, he even took part in a small art club encouraged and conceptualized by the father of a fellow student, who happened to be a professional artist.

After graduating from Moody Bible Institute, Jim decided to became a missionary pilot. He returned to Africa in 1973 to fly for SIM in Niger, which is directly north of Nigeria, his home country. Seven years later, he met his wife, Sandy, at the SIM office in Niger. Like Jim, Sandy grew up as a missionary kid. They have been married for 37 years and have three grown children. Jim and Sandy reside in Rock Hill and still work with SIM at their U.S. office in Charlotte.

We are grateful not only that Jim shared his artistic gifts with Ben Lippen School this year, but also for his willingness to spread the Gospel to the far reaches of the world over many years.