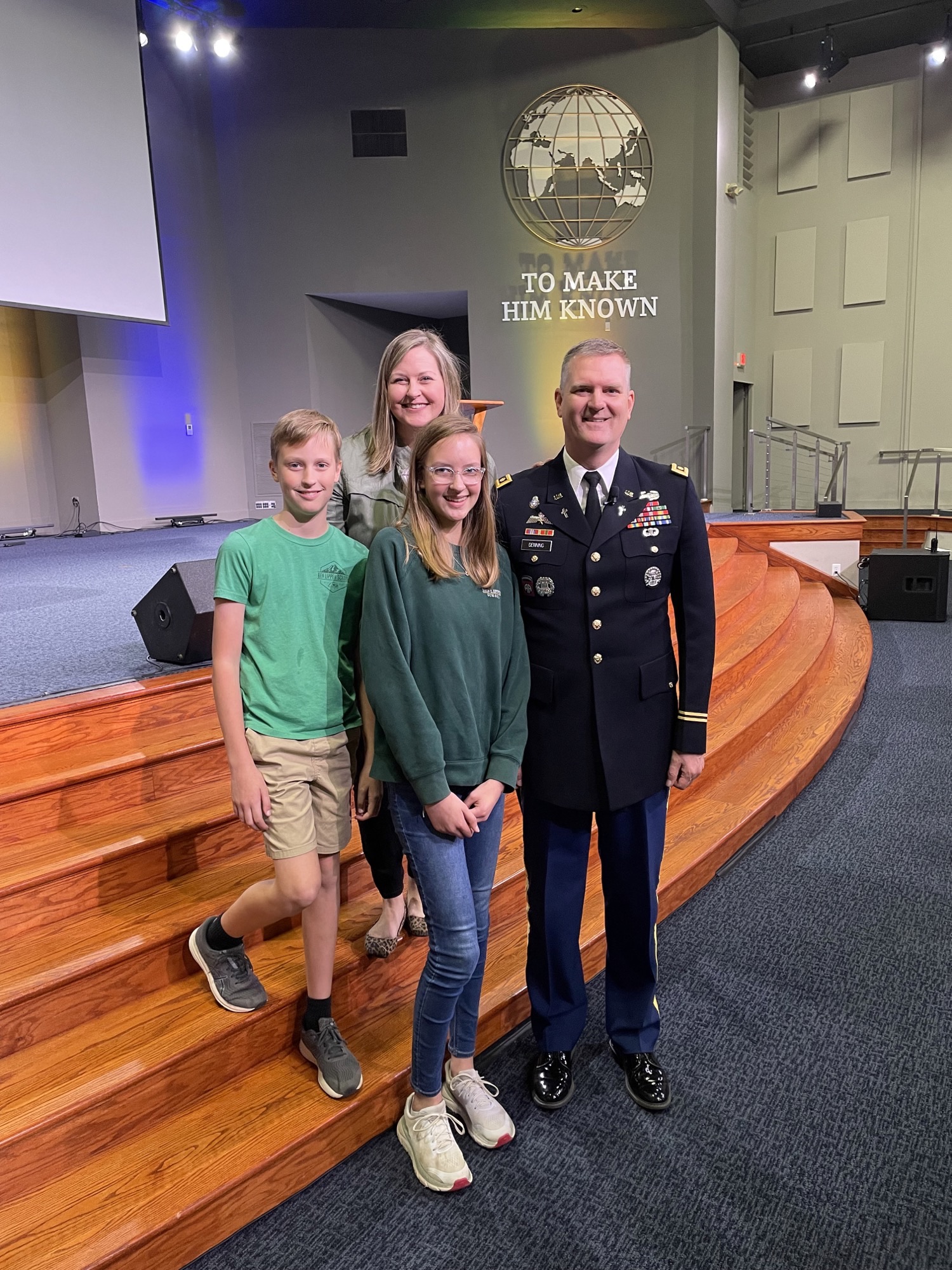 This Veterans Day, Ben Lippen School honors all who have served in our nation’s military. With the eighth grade class having just laid a wreath at the Tomb of the Unknown Solider while on their trip to Washington, DC, middle school parent Brandon Denning spoke to the student body about his time serving as a guard at the Tomb. 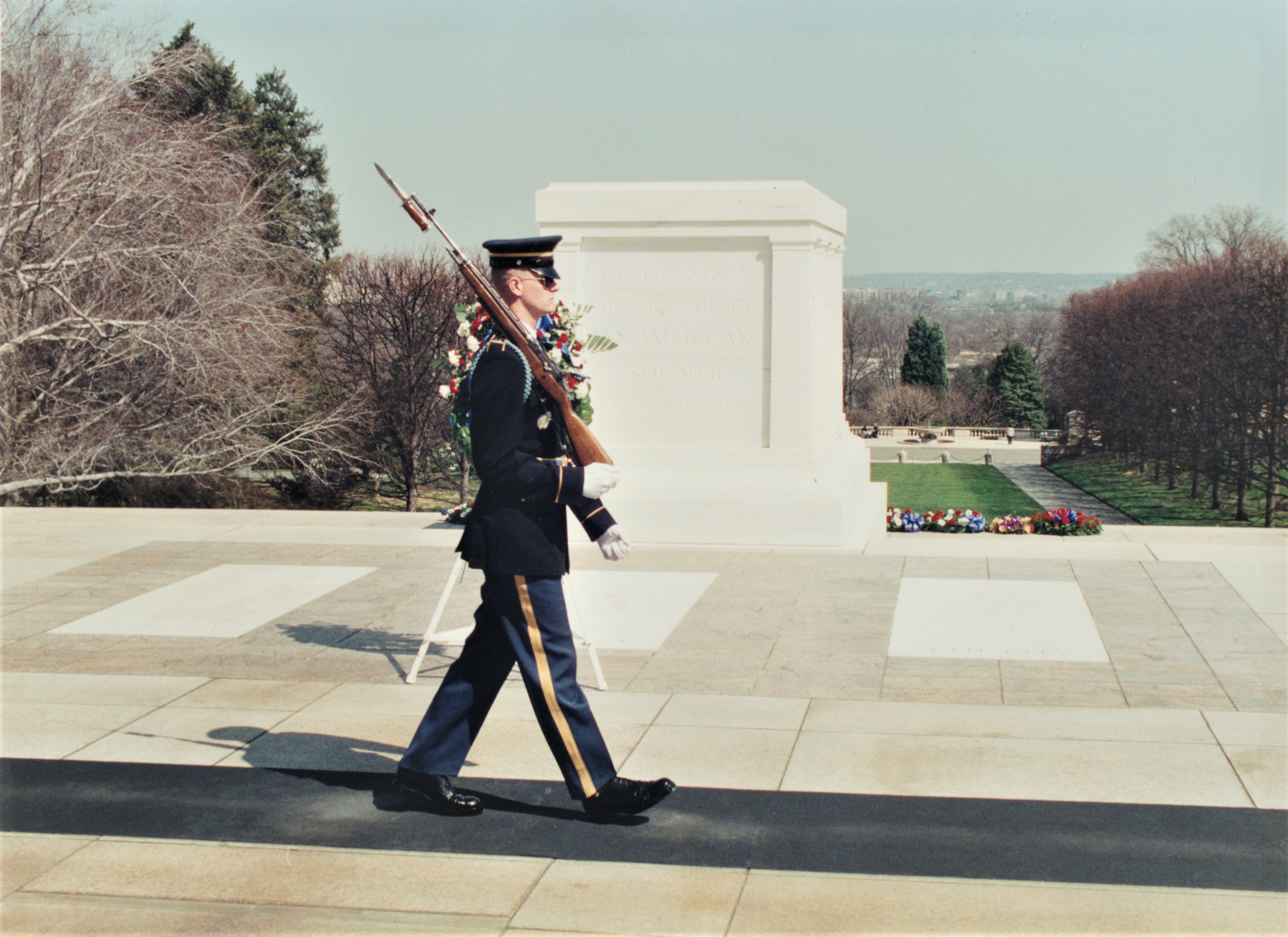 Beneath the waves of white tombstones, presidents, veterans, and active duty service personnel, men and women who lived, breathed, and died for our country, spanning centuries of wars and conflicts, rest in America’s most sacred field. They are remembered by flags and visits by those closest to them communing in hushed whispers so as not to disrupt the somber slumber of the surrounding hills.

Arlington is silent, except for one sound.

The “click” from the Memorial Amphitheater does not disturb the peace. Rather, it echoes with honor as a guard takes his post. In 21-second increments, he pauses, then turns to face his ward: the Tomb of the Unknown Soldier, a sarcophagus holding the remains of fallen American soldiers from World War II, the Vietnam War, and the Korean War “known but to God.”

After 21 more seconds of watch, he begins to pace for 21 more steps along his black footpath. Pause. Face the Tomb. Pace. Repeat for 24 hours, keeping a promised presence with the fallen. 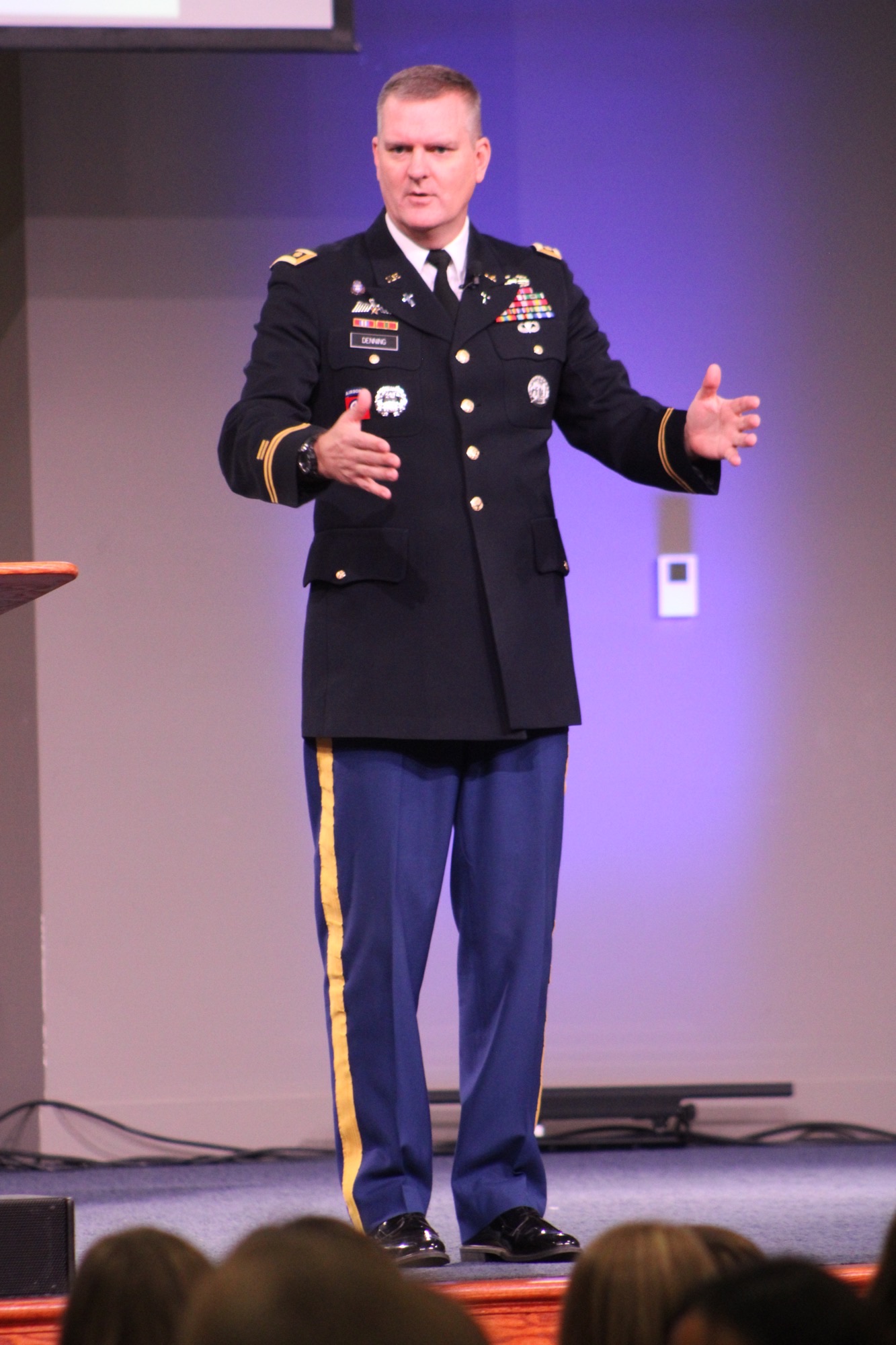 Inspired by stories of his grandfather, a World War II veteran, Maj. Denning enlisted in the United States Army at the age of 18. From the start he aspired to stand out from the rest, taking the Amy’s then-motto to heart.

That mindset is exactly how he landed a spot as a guard at the Tomb. The selection process for this coveted post is extremely niche—the first round of applicants must fit a certain height and weight requirement, pass a physical fitness exam, and pass a background check because of interactions with foreign and domestic dignitaries.

Remaining contenders will then travel to Arlington for further trials. Round Two is more mental that physical, with tests on the history of the cemetery, military uniform inspections, and the Guard’s manual.

Of the seven soldiers that applied in 1996, Maj. Denning was one of two that were chosen.

“It’s the highest honor to be able to guard the soldiers that came before you and lost their identities, and as a result, never had a proper funeral,” he said. “Their loved ones never got closure. And so for us to be able to go through these standards that are set at the Tomb of the Unknowns, to be able to honor their service was important.” 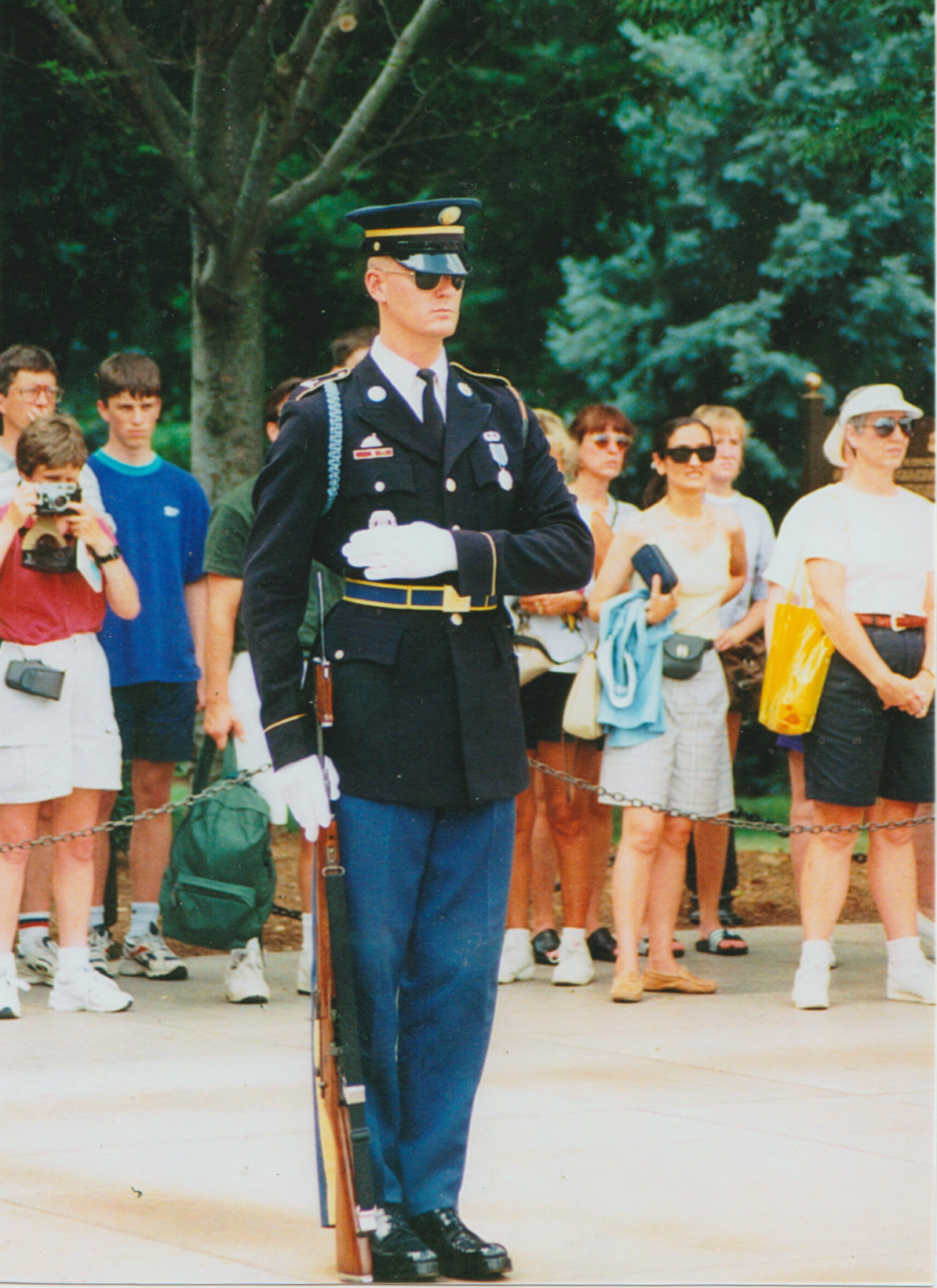 He was “extremely excited” to be chosen for this task, despite the grueling shifts and often precarious weather conditions. He even witnessed a historical moment while on duty: the identification of the Vietnam Unknown, now known and buried as Air Force Cpt. Michael Blassie.

“It was a great privilege to guard Cpt. Blassie and maybe be part of helping restore honor to the brave men and women who did what their country asked of them in Vietnam,” he said.

After serving his time, Maj. Denning took a break to attend and graduate from the University of Tennessee at Chattanooga before beginning a Master of Divinity degree at Southwestern Seminary. He then explored the previously-unconsidered idea of chaplaincy after a conversation with a friend wounded in Iraq opened his eyes about the impact he could have.

With his degree completed, he re-enlisted in the Army as a chaplain and was assigned to the 82nd Airborne. Following chaplain school, he was deployed to Afghanistan with the 4th Brigade in Operation Hero Recovery and was soon after reassigned to Arlington National Cemetery to spiritually serve the guards there from 2011-2013.

“I really felt like God laid it on my heart to minister to soldiers in some of the most difficult situations that they face,” Maj. Denning said. 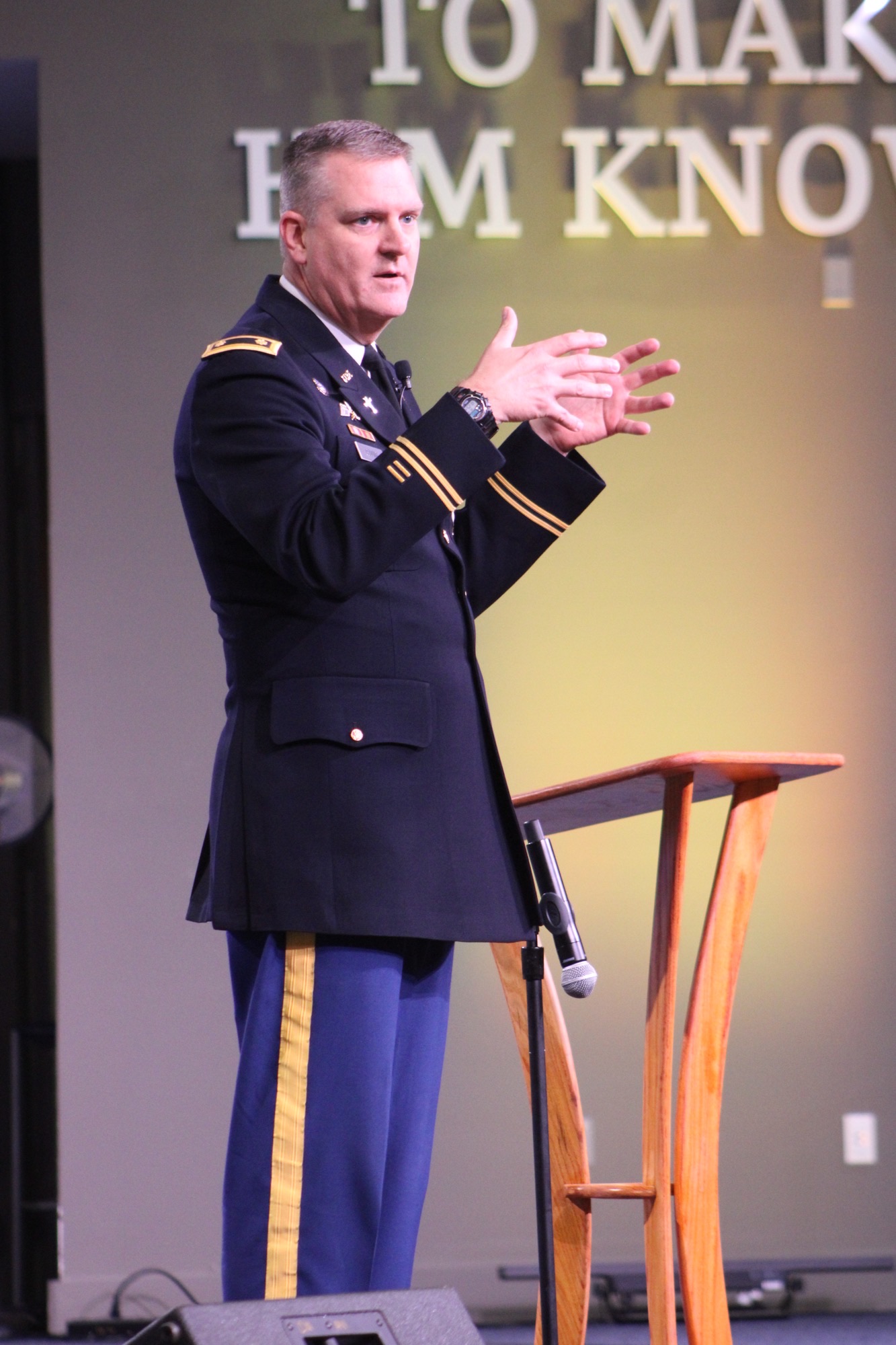 His previous post allowed him to build a bond unlike any other with the current guards; a bond based on a mutual understanding of their task since he had been in their shoes before.

To this day, Maj. Brandon Denning is the only person in U.S. Army history to have served as both a Tomb guard and Tomb chaplain.

In 2020, he graduated with his Master of Arts in Bible Exposition degree from Columbia International University. Presently, he is a homiletics instructor at the U.S. Army Institute for Religious Leadership in Fort Jackson, South Carolina, but looks back on his time at the Tomb with a mission in mind.

“It’s important to show the American people the sacrifices that have been made for our freedom and the cost of our freedom,” he said. “To drive that home to them and let them know that what (the guards) are doing means something, but also to be able to speak into their lives about spiritual things is one of the greatest ministries I’ve ever had in the United States Army.”