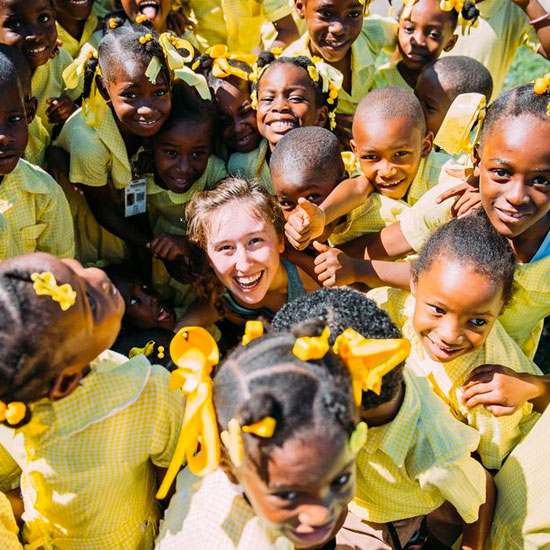 Students Minister to Students in Haiti

Find out how a group of our students made a difference on the Léogâne Plain in western Haiti during Winterim.

What happens when you take a baker’s dozen of Ben Lippen Upper School students out of their comfort zone and place them in a fifth-world country called Haiti? Challenge them with the opportunity to minister to over 1,000 children in 4 days and you see how God has prepared Ben Lippen students to do His work in various circumstances. See what our students think of “students ministering to students” in the testimonies below:

I was forced to try to understand and communicate in ways that didn’t require speaking in their language. I think that it brought us closer together because now I know that the language barrier can be overcome if you show that you love them. It only took a smile and just interacting with them to make them smile and feel loved. I feel like the Holy Spirit was working in all of us.

In the local church, I felt as though I was part of the community. I could feel their faith and belief in the Lord. At school, there were language barriers but these were overcome by hand motions and amazing translators. What was most amazing was that the children wanted to play the games and learn. They wanted to enjoy the short tie of community that we offered. I loved seeing the joy in all the children. Though they did not have much, they acted like they had all of the love and happiness in the world.

As an MK, I grew up looking forward to the short-term teams who would come and pour themselves into day camps that we could enjoy while our parents were in meetings. Ever since then, I’ve wanted to be a blessing, in the same way, those teams were to me. I was able to do that on this trip. I loved sharing the joy of making arts and crafts with the kids and to see the kids be so creative and proud of their creations.

The opportunity to work with other students as a student myself helped me to feel more connected to the people of Haiti. Just like my friends and me, they get up and go to school every morning. The enthusiasm of the kids was really exciting. In the U.S. it is easy to forget what a privilege education is. In Haiti, the kids understand the incredible gift they have. More than that, it taught me that kids are kids in any culture. We all want someone to pay attention and love on us, someone to have fun with.

Ministering student to student was so amazing because I loved being able to just play soccer or jump rope with kids and build relationships. Without even talking a whole lot but just by playing, laughing, and smiling together, we became friends. When we got to worship with the children, it was like there was no language barrier or cultural difference but like we were all one in Christ. All of this made for the most amazing experience.

By working in a different country with people who sounded different, looked different, and smelled different, it’s easy to see the effects of the Tower of Babel. However, there was one commonality we all had, which was Christ, and that was enough.

During my time in Haiti it was eye opening. I was worried about communicating with the kids because there were three translators for 16 of our people and 700 kids. When we got to the schools, it never failed for multiple children to run up to you and want to play. They acted like there was no language barrier and we were life-long friends. I expected to show Christ’s love to the children but in return, they showed His love to me.

It was great to bring smiles to all of the kids’ faces. To watch the team show acts of God’s love was an amazing experience. The children still had the joy of the Lord even in the worst conditions. Our team showed love and compassion to everyone.

It was amazing to minister to other kids. In America, we often think that as a high school student, we can’t make a difference in the world. But while in Haiti, I felt like I truly made a difference in the lives of children. One of the most difficult things on the trip was the language barrier. It was hard not being able to talk fluently with the children but just being able to love on them and hold them was enough. The children loved being held and hugging us. One thing that stood out to me was that although the children had so little, they were so content and joyful. It was truly eye-opening.

During my time in Haiti, I was able to connect with the kids. I was worried because of the language barrier it would be difficult, but the kids found every way possible to try to communicate what they were saying. Although we were there to teach the kids, I feel like they taught me.

Our team of thirteen students and three adults arrived in Port-au-Prince, Haiti, on Saturday and endured the two-and-a-half hour bus ride to the New Missions compound on the Léogâne Plain in western Haiti. This was the first opportunity for the team to see the extreme poverty and lack of basic infrastructure of the country. Though it was eye-opening, it did not undermine the resolve of the team to make a difference with the Haitians they would encounter.

The church service in the village of Léogâne was a packed house of Haitians and the team from Ben Lippen. Having the opportunity to hear from the founder of New Missions, Madame George, was a treat for the locals and educational for the team. As our team of musicians and vocalists began their singing, the crowd joined in with great fervor as the team sang in the native Creole language. Learning songs in Haitian Creole was exciting for the team but appreciated throughout the week. Ministering throughout the week at the schools in Masson, Signeau, and Concrab proved exhausting to the team, but God certainly showed His power through Bible teaching, crafts, and games. The day camps operated by the students proved to be a great success and an attraction to the adult villagers in each community. Our students shared God’s love in many ways.

As students had the opportunity to worship with and serve both Haitian believers and non-believers alike, God’s Spirit empowered each team member in His own way to be effective. Each student left Columbia hoping to be a blessing and returned being blessed beyond expectation. To God be the glory!